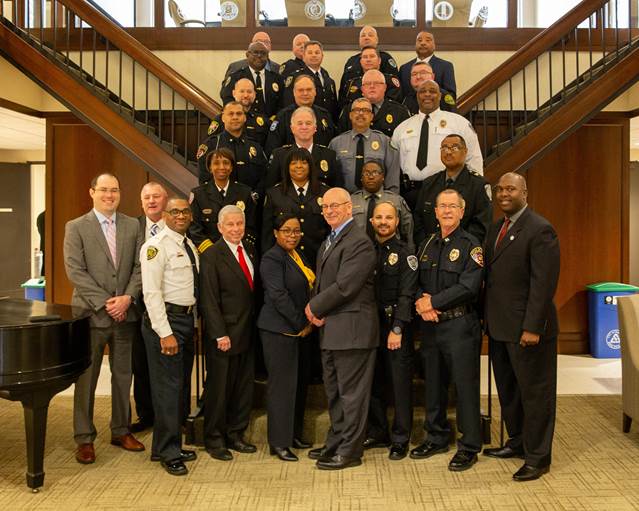 “The Board of Governors and I commend both of these men for their high honors,” said Chair Ramsey. “Their continued dedication and actions are a testament to the excellent campus police departments that we have in the UNC System. There is no call that these men and women do that is insignificant and all of our departments work extremely hard to ensure that our campuses remain safe for our students, faculty, staff and visitors.”

The Officer of the Year Award for Outstanding and Exceptional Service is given to officers who complete a task or assignment that goes beyond the normal call of duty, which serves to enhance public safety, encourage community involvement and demonstrates an effective outcome in crime prevention, community-oriented policing or other projects.

Det. Young was nominated by UNCG Police Chief Paul Lester based on his work on several complex and notable high-profile cases that routinely resulted in arrests, seizures or convictions. Det. Young has served with the department for over five years.

The Officer of the Year Award for Acts of Valor is given to officers who have, through a conspicuous act or acts, distinguished themselves by bravery, heroism or outstanding courage and has placed the safety and welfare of others above all other considerations.

Lt. Gundacker was nominated by UNC Charlotte Chief of Police Jeffrey Baker for actions related to an active shooter situation on campus on April 30, 2019. Lt. Gundacker, who served and retired from the New York City Police Department after 22 years of service, has been a member of the UNC Charlotte police force for six years.

Chair Ramsey was joined for the presentations by Brent Herron, associate vice president of Campus Safety and Emergency Operations for the UNC System.